Pa Socheatvong to Vann Molyvann: Don't look down on the younger generation, we are not all ignorant ... we know how to fill our pocket better than you 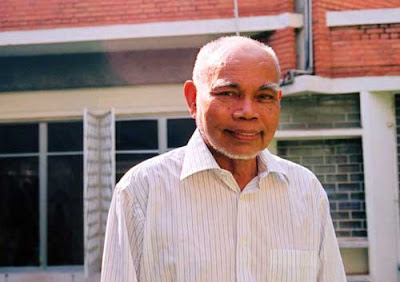 The filling of Boeng Kak Lake for development turned into a heated debate between an old hand and one of the younger deputy city governors. The filling of the Boeng Kak Lake is strongly opposed by 81-year-old architect Vann Molyvann who is concerned that the filling of the lake could cause flooding in the city, especially in Tuol Kok district. In response to this concern, Pa Socheatvong, the deputy city governor, rejected the criticism leveled by Vann Molyvann, saying that the later should catch up with the times, that the ideas by older generation people are not always right, and that the younger generations are not all ignorant. Pa Socheatvong warned the old architect not to look down on the younger generations too much. Pa Socheatvong raised the issue of the benefits brought by the development of Boeng Kak Lake by saying that it will help the Boeng Kak Lake community since the residents will be provided housing on top of the filled lake.
Heng Soy at 12:35 AM
Share